Aerial drones broke into the mass market relatively recently. But now at the legislative level are beginning to discuss future initiatives related to the use of quadrocopters for the benefit of man, for example, for the ultra-fast delivery of small HVD cargos.

AirDog creators have gone much further. They want to replace is not the courier, and the operator. Here is the most advanced drone of the existing, able to do what none of the more unique never succeeded.. Personal drone quadrocopter, automatically watching over you

The basic idea AirDog: it is a drone that flies unaided and filmed everything proiskhodschee on the ground around you. You read that right: in open spaces, the owner drone does not need to manage anything. Suffice it to wear a special waterproof bracelet that will transmit your quadrocopters position and direct his camera at the desired angle. Bracelet called AirLeash - in fact, lead to AirDog.

AirDog configured using corporate applications for iOS and Android, where you can specify one of six automatic tracking modes for you. Auto-Follow cause the drone to repeat the route of your movement a hair's breadth, keeping the pre-configured height and distance. Relative position follow preserves the direction of the camera is fixed depending on your path.

Follow track - the perfect mode for those involved in sports and runs / rides / swims the same routes every day. Once memorized, how you move, AirDog will fly independently on the same route, but all the time you shoot it. Thus it is possible to remove the video interesting, like sports broadcasts races. Only the operator is not needed.

Hover and Aim for removal of the plot in closed parks. In this mode, the drone hovered over fixed-point shooting AirLeash bracelet owner, wherever he was. Circle corresponds to the name: AirDog itself will fly on a predetermined circular path, stop taking it without you. Finally, Look down to set a fixed angle shooting. As you might imagine, there is nothing stopping drone manage manually. In addition, the creators promise to add new modes in future software updates.

As the camera is used GoPro Hero III, which will necessarily give good results when shooting any video in a variety of settings.

We go over the specifications. continuous flight time - 10 to 20 minutes depending on the speed of movement (4000mA battery). Wind resistance - up to 14 meters per second and a maximum flight speed - up to 64 km / h, understated software. Range of AirLeash and signal reception - up to 300 meters. Maximum altitude - 3000 meters above sea level. Weight - 1.8 kilograms, taking into account the battery. 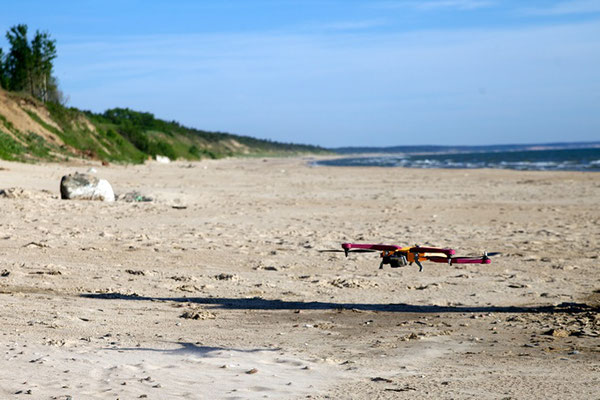 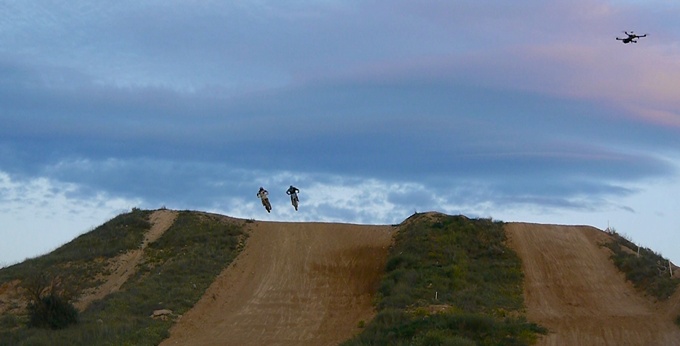 If you are interested quadrocopters, you should have already prepared the money. AirDog - a thing not cheap: base model will cost $ 1,200. It should be noted that the retail price will be even higher - from $ 1,500.