Wingsland - was founded in Shenzhen City, Guangdong Province, China. The company's goal, to change the world through new technologies implemented in

Own products. A lot of experience has been gained in the field of unmanned aerial vehicles for the military and consumer markets.

The manufacturer positions its UAV as a high-end device with functions that you will not find in the drones of other eminent brands.

Weight of a drone with a battery 230gr

Positioning sensors for flight in the room

Max. Flight time up to 10 minutes

Max removal distance up to 100m

User manual (in Chinese and English)

Flight time: up to 10 minutes

Before the consumer, the Wingsland S6 comes in quality packaging at the Apple level. The drone itself is packed into a box in a kind of transparent case. The quality of performance of the S6 is comparable to the drones of the "Premium" class, at the tactical familiarization you clearly understand that you have a high-tech product in your hands.

The design and compactness of the S6 deserve special attention, modern trends are clearly traced, the drone without exaggeration is compact, the appearance is futuristic, designers have worked hard to glory. I can not even believe that in such a thin case are hidden the whole 3-ri processor with a wide range of possibilities for self-drones. What is the choice of colors: Green Blood, Metallic Silver, Banana, Fresh Orange, Subtle Acqua, and for sure in the future the range of individualization will be significantly expanded.

Also, it is worth noting the additional accessories, which can be separately retrofitted drone Wingsland S6. This is a multi-shot gun that shoots 8mm balls, an LED spotlight with different glow modes, Emoji. The display on which you can display messages or "bright" characters, well, the most, in our opinion, popular in the future is an infrared sensor system (360 °) that Allow the S6 to fly around obstacles in the "Follow me" mode. Why in the future, but because unlike other accessories, this will go on sale later. 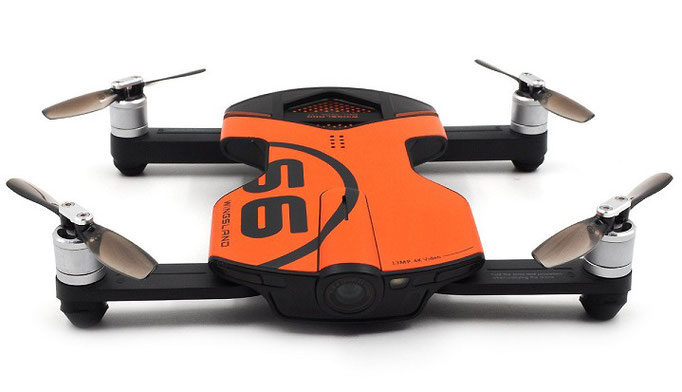 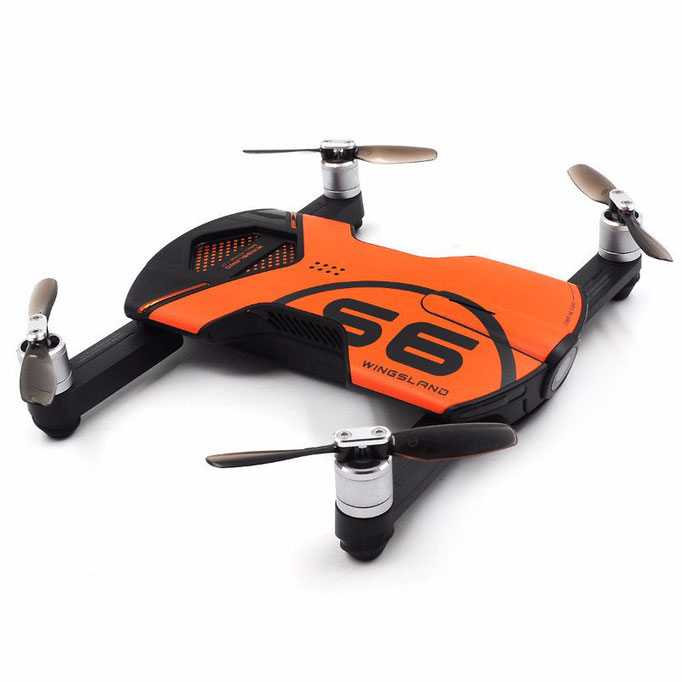 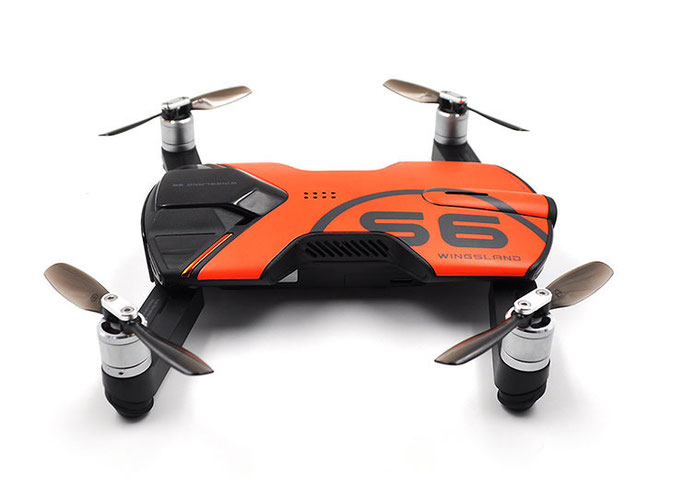 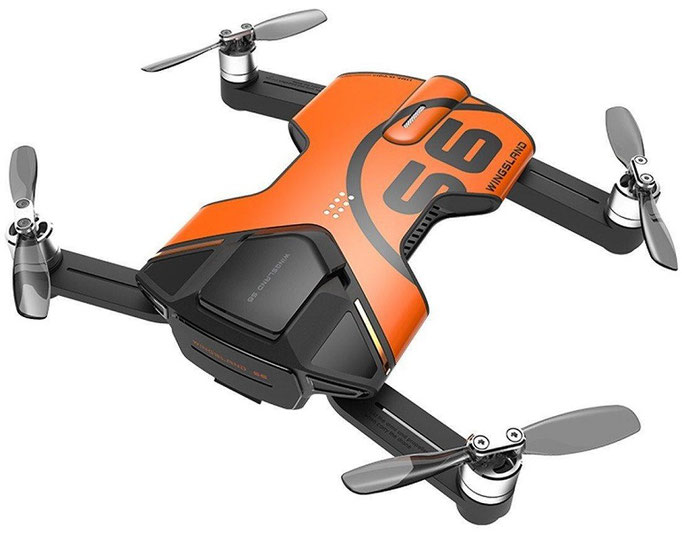 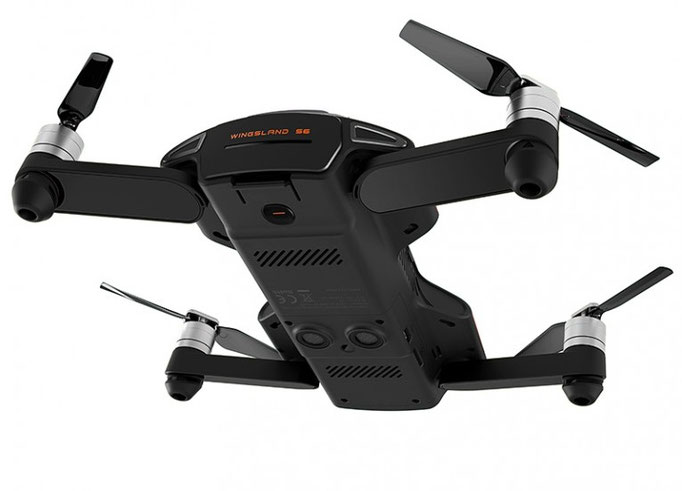 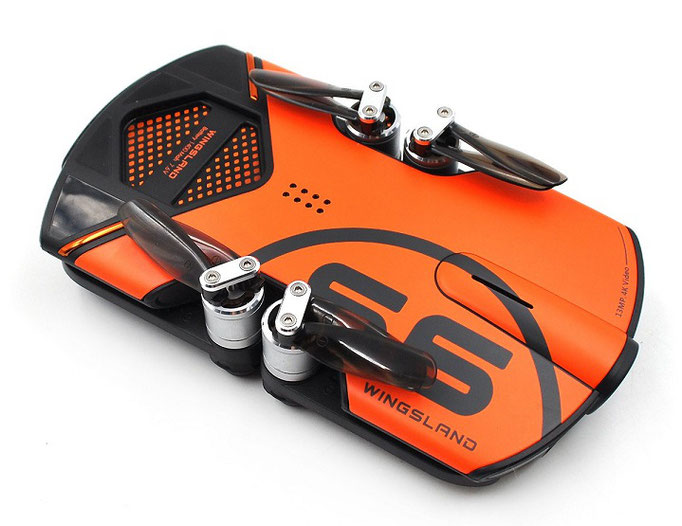 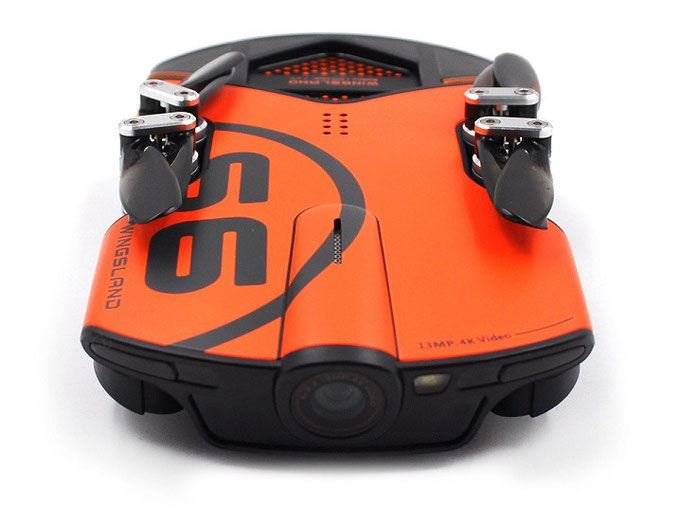 The drone of the Wingsland S6 is equipped with brushless motors of the type: 1106 4300KV with motor shaft blocking system.

Wingsland S6 is equipped with a 2-cell lithium-polymer battery with a capacity of 1400mAh. According to the manufacturer's specification, the flight time is not more than 10 minutes, depending on the operating modes. The battery charge time is about 2 hours. Separately, such a battery can be purchased at a price not more than $ 40.

In terms of management, nothing has changed here, as well as all well-known self-drones Wingsland S6 is controlled by a smartphone / tablet running on the IOS / Android OS using the application "WINGSLAND Fly".

After a brief pairing, the drone can climb to a height of 100 meters and be removed to a distance of up to 100 meters. Control is possible in 2 ways: classic virtual sticks and gadget position in space.

In addition to the full control of the drones, the application allows you to edit the resulting photos and videos (adding subtitles, combining frames, overlaying music) and instantly transfer images to various resources and instant messengers.

The manufacturer did not forget about the classic method of control, through an analog console, which visually is somewhat similar to the remote from Mavic Pro. The consumer, if desired, will always be able to purchase it separately. The first sales of analog equipment will begin only in April this year at a price not more than $ 100.

Auto-fly and auto-landing - the drone takes off and sits with one touch of virtual buttons on the gadget's display.

Auto return home - returns to the take-off place as commanded by the pilot, as well as with a low battery charge or in case of signal loss. Point of interest - after setting the radius of the drone, automatically flies around the object for shooting.

Follow me - after activation, the drone automatically follows the device with which it is paired.

Photo 360 ° - after activation, the drone will rotate around its axis and simultaneously with this will shoot 12 photos, which later mounts into one large panoramic frame.

Flips - playfully performs coups, one "tap", one flip, everything is simple.

Standard Mode - the standard mode in which the full potential of the drone is available.

Home Lock Mode - activating this mode, the drone is conditionally tied to the takeoff point by moving the control stick to the left or right of the drone will circle around this point in a constant range of radius.

Course Lock Mode - this mode disables the orientation of the drone in space, the principle of operation is similar to the known mode of "Headless mode".

In the test showed distinctive stability and positioning accuracy, both on the street via GPS / Glonass, and indoors through optical and ultrasonic sensors. In the management of the drone is predictable and accurate. All functions and modes work faultlessly, there are no remarks.

The quality of the survey as a whole is in line with the manufacturer's stated specification and there were no special observations at the time of the test. Of the minuses, one should note only one, the present 3-axis stabilization is practically invisible in operation, which also spoils the whole picture, and it seems that if the drone were not so stable in flight, the entire potential of the drone chamber would be brought to nothing.

The flight time fully corresponds to the declared 10 minutes, and to be precise, everything depends on the activity of operation and in fact the time interval ranges from 7-10 minutes.

As already mentioned above, the manufacturer offers a number of additional accessories to the Wingsland S6 drones. Each of the accessories is attached to the top of the drone through a special contact port via an adapter, all accessories are feedbacked and controlled from the gadget with which the drone is connected. The price range will range from $ 20-50.

Display Board (Emoji Display) - a mini-screen that can output both messages and color symbols (emoticons, hearts, etc.).

All-Around Obstacle Sensing & Avoidance - the system of infrared sensors provides the drones with the ability to fly around obstacles when the Follow me function is active. This accessory is able to detect objects from all sides: from above, directly, from behind, to the left of the drone and to the right of the drone. (Coming Soon)

- do not need to register

- stabilization does not work well

- you can not change the angle of the camera

Well, we can say, another premium selfi-drone, which is certainly worth its money. The card of the drones is its compactness and design, but if it starts to fly correctly in the future, then S6 will occupy a niche as the best of the best. In general, if you do not find fault with stabilization, then with the skillful piloting of the Wingsland S6, you can always get good selfies, which is what is required of it. Anyway, everyone will choose according to their personal preferences, the good we have and good choice. Age limit is 14+.